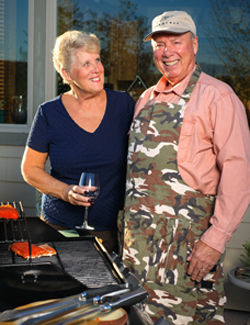 The Jansens recently celebrated their 50thwedding anniversary (yes, they were high school sweethearts)! And they could not be happier having a place to call home in IronHorse as they continue their lives together.

Vern initially was introduced to IronHorse at an Oregon State football game (IronHorse was a sponsor). As a Beaver fan, he was impressed with the association IronHorse had with the school’s athletic program and the location resonated with him as he liked exploring and hunting in the Ochoco forestland.

One late fall, Vern was hunting in the area and decided to stay the night in Prineville rather than drive home that evening. It was late and as he checked into the Stafford Inn, he asked the woman at the desk where“this IronHorse place was”. She pointed over her shoulder and said “It’s just right up the hill behind us.”

The next morning, a curious Vern set out to see this IronHorse for himself and was intrigued with the potential he clearly saw in the neighborhood. But he wasn’t quite convinced yet. Months later, he asked Diana to visit Prineville and they soon found themselves again at IronHorse. A few months after that, the Jansens bought their homesite and began building their lovely “second home”, as a retreat from their permanent residence in Albany.

Vern loves the quick access to the recreation and lifestyle that drew him here in the first place. Diana loves the community and the laid-back, small-town feel of Prineville. Their big family (20+ with kids and grandkids) loves to visit their Prineville home and they find themselves spending more and more time in Prineville than in Albany. Once their youngest grandchild is through school in the valley, they anticipate living in Prineville more permanently—and they can’t wait! 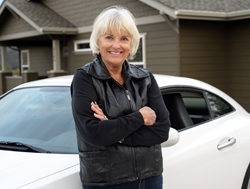 Dorothy may qualify for the senior discount at her favorite restaurant, but she’s definitely young at heart. She moved to Prineville about 5 years ago after living on a large property at the Oregon Coast with her husband for 30 years. She and her husband, Walt, relocated to Prineville because of its small-town charm, mild climate and tight-knit community feel. After looking at larger pieces of property around Crook County that were a few miles out of town, they visited IronHorse for the first time. Dorothy recalls standing on the vacant lot where her beautiful home now sits and hearing her husband say “This is it.”

The team at Sun Forest Construction worked with Dorothy and Walt to build them a  charming single-level home with custom details (like a bonus room in the garage) that has wonderful views above the city. They were the first residents in that section of IronHorse and instantly fell in love with their new home and community.

Walt passed just a year later (they both knew it was coming, but the goodbyes after 62 years together were impossibly difficult). Despite her loss, Dorothy felt secure in the decisions they had made as she entered a new chapter of her life in Prineville.

She was instantly be-friended by a few people in the community and now has a large circle of friends that she goes to church with,has dinner with and plays cards with. She can often be spotted jetting around in the cute little white coupe Walt bought for her as her “fun” car.  She enjoys tending to her flowers (although she’s struggled finding flowers the deer won’t eat) and enjoying the wildlife and peaceful scenery from her backyard.

Perhaps the greatest blessing in Dorothy’s life is her neighbors. She and Diana hit it off instantly during the last few months of Walt’s life as Diana and her husband, Vern were building their home in IronHorse. Not only do they talk daily (either on the phone or at each other’s homes/backyards), but they regularly go out to dinner together, walk the IronHorse trails together and get together when each other’s families are in town. Dorothy is also friendly with many of her other neighbors in IronHorse and enjoys the informal monthly get-together they have, rotating among their homes. She’s particularly excited that her daughter and family are moving to Prineville soon to be closer and enjoy the small-town life they don’t have in the valley. Dorothy’s full life is just about to get a little fuller. 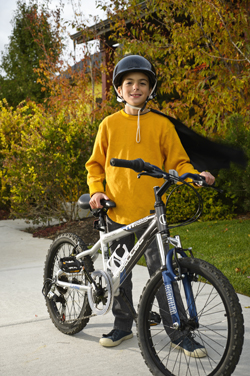 Cameron lives in IronHorse with his mom, dad and older sister. He’s called this home since he was two. The family has a beautiful garden full of flowers and vegetables (he’ll show you their big squash, just ask!). They even have 6 chickens that keep the family stocked with eggs.

Cameron loves playing with his friends (two of his best buddies live in or near the neighborhood) and you can likely find them all riding bikes or visiting each other’s houses. He likes sail boats and is proud of the collection in his room.

Cameron goes to Barnes Butte Elementary, which is a stone’s throw away from his home. Yes, life in IronHorse is pretty sweet for a kid. Just ask Cameron.

Send us an email